President Recep Tayyip Erdogan’s dream of digging a canal in Istanbul to compete with those of Suez and Panama is met with fierce opposition from the new mayor of the Turkish megalopolis, who is increasingly asserting himself as his main rival.

Ekrem Imamoglu, a member of the main opposition party and elected mayor of Istanbul in 2019, maintains that the project, estimated at around 11 billion euros, would be a waste, an environmental disaster and would increase the seismic risk.

“The + Canal Istanbul + is a criminal project”, he denounced in December by launching a campaign entitled “Either the Canal or Istanbul” and by announcing the withdrawal of the town hall from the construction protocol signed by its predecessor.

“We will do everything in our power to prevent this project from being carried out,” he added.

On Tuesday, he went to the governorate of Istanbul to deliver a letter requesting its cancellation.

Also Read>> Damascus Has All Reasons to Smile

Announced in 2011 when he was Prime Minister, the “Istanbul Canal”, which would link the Black Sea to the Mediterranean Sea, is one of those “crazy projects” that Mr. Erdogan, now president, intends to implement.

Erdogan has already overseen the construction in Istanbul of a Bosphorus tunnel, a third bridge spanning it and a colossal new airport. But the canal project, which would be 45 kilometers long, is much more complex.

His detractors castigate a “whim” that would further indebt Turkey and would benefit businessmen close to the president.

Faced with criticism from the mayor of Istanbul, Erdogan remains firm: “We will build this canal, whether they like it or not,” he said on Monday.

The canal project had been set aside from 2018, a year marked by economic difficulties.

But experts believe that the reasons behind Erdogan to put this project back on the agenda are primarily political.

“He is trying to keep hold of the subjects debated in Turkey” and “to challenge Ekrem Imamoglu, who has greatly increased in popularity since his shattering victory in the last elections”, analyzes Berk Esen, of Bilkent University in Ankara.

But the academic believes it could be a “huge strategic error”.

“I think it will be difficult for the Turkish president to sell this project, given the economic context in Turkey,” he predicts.

According to him, Imamoglu, often described by observers as a potential rival of Mr. Erdogan in the presidential election of 2023, “very cleverly” accepted the challenge and is trying to “politicize this subject to gather support, in Istanbul and in the rest of the country. “

The government argues that the canal would provide Istanbul with a new pole of attractiveness in addition to relieving the Bosphorus, one of the most congested straits in the world.

“It is enough to observe the Bosphorus at any time of the day to realize that it cannot withstand such traffic,” launched the Turkish president last week.

It also points to the 41 accidents that have occurred on the strait in the past two years.

Imamoglu insists that the government cannot simply ignore its arguments. “I am the mayor of Istanbul. The project I oppose is not in California”.

The government denies fears about possible environmental damage and the increased risk of earthquakes by brandishing the conclusions of reports on the subject, but part of public opinion continues to doubt.

The Republican People’s Party (CHP), the main opposition party to which Imamoglu belongs, mobilized to convince.

After the publication of the conclusions of the environmental impact study, favorable to the canal, the CHP invited the Stambouliotes to go to the district town halls to file an opposition form to the project.

In some areas, long tails formed despite the pouring rain.

“We don’t need the Istanbul Canal,” says Gulseren Hayirligolu, who has come to drop off the form. “It would be an environmental massacre.”

Others call for the organization of a referendum.

“Erdogan must submit this question to the people,” claims Suna Duranolgu, a 53-year-old housewife. “He cannot make this decision alone.” 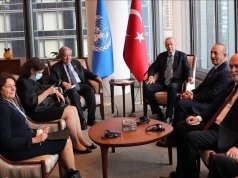