The exasperated expansion of global financial lists in the last two years, which has led to the take-off of Wall Street and the other large squares to levels never previously reached in terms of capitalization and dividends, has taken root in the favorable context created by central banks who, willingly or unwillingly, had to continue to follow the trend of the low cost of money and easy financing inaugurated in response to the great crisis.

The new normal of the era of ” global quantitative easing “, therefore, draws a precarious architecture: an emergency response that has become ordinary and regular factual situation has led to a new, and hardly reversible, detachment between stock market expansion rates and the real economy. For some time now, the financial analysis has been asking whether an exogenous shock capable of affecting the globalized economy in the precarious chamber of compensation between the real system, commercial architecture and financial system can intervene to end the fat cow phase. Or a “black swan”, an expression that gives its name to the essay of the same name by Nassim Nicholas Taleb and that in Italy it was popularized by the current Consob president Paolo Savona.

Can coronavirus be the black swan of the world economy? Certainly, the seriousness of the disease is not to be underestimated, but in the presence of the actual data on infections and deaths outside  China, the epicenter of the epidemic, it is surprising the extent of the isolation maneuvers put in place by the various political and economic decision-makers. A “sanitary cordon” that seems to have suspended the globalization system for a few weeks. And which could, according to some experts, create a global avalanche effect.

Economist Piergiorgio Gawronski pointed out in  Il Quotidiano that Covid-19 could take on the identikit of the feared black swan. Gawronski points out that “the Chinese government expects growth to slow from 6.6% to 2.5% this year”. A factor of primary importance for the world system: “the great econometric models of the global economy indicate that for every 1% of Chinese growth that goes away, the slowdown in the rest of the world is equal to 0.3-0.4%. This would imply a slowdown in the global economy from 3.3% to 1.8% “of growth in 2020.

Another expert financial analyst, Mauro Bottarelli, has a different opinion which does not, however, deny the economic impact of the virus, but rather underlines how instead of the real “black-swan effect” an instrumental narrative is being developed to allow the banking and stock exchange system to postpone any reflection on governance and systemic risks to an indefinite future. This is testified by the reactions of the central banks of China, the USA, and Japan: “The Chinese PBOC has returned to expansion, the Federal Reserve has obtained the alibi it needed to postpone any decision on the withdrawal of monetary measures until after the summer. Act, the Bank of Japan will probably be studying an even wider purchasing plan, abandoning the ETFs and directly purchasing single securities in difficulty “, writes Bottarelli in Il Sussidiario, also underlining how Wall Street did not jump strongly in the face of the news published by one of its champions,  Apple,  which cut expected profits from 67 to 63 billion dollars.

So in this context, according to the analyst, the stock exchanges would not suffer long-term damage from the coronavirus but, on the contrary, would receive an unexpected flywheel. After all, China has chosen monetary stimulus as a response to the economic distress caused by the blockade of the Wuhan region and the risk of systemic gangrene. It remains to be assessed whether this stimulus will have productive repercussions or will serve to keep banks and credit institutions afloat, which in the face of the blockade of assets risk default.

The truth, most likely, lies in the middle: the humor of the markets will tip the balance. For now, reassured by the prompt response of public decision-makers who, however, risk behaving like ostriches, putting their heads in the sand in front of the prospect of a further detachment between a real and commercial economy potentially touched by the coronavirus and a customs-cleared bag in its growth. The royal black swan could, in the end, be this admission: the global economy would, therefore, warn that the king is naked and would feel the need for greater compensation. Even at the cost of stopping the race for finance and calling the central banks for more vigorous action on rates and monetary expansion. 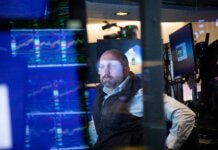 Banks continue to support the majority of Gulf stock markets