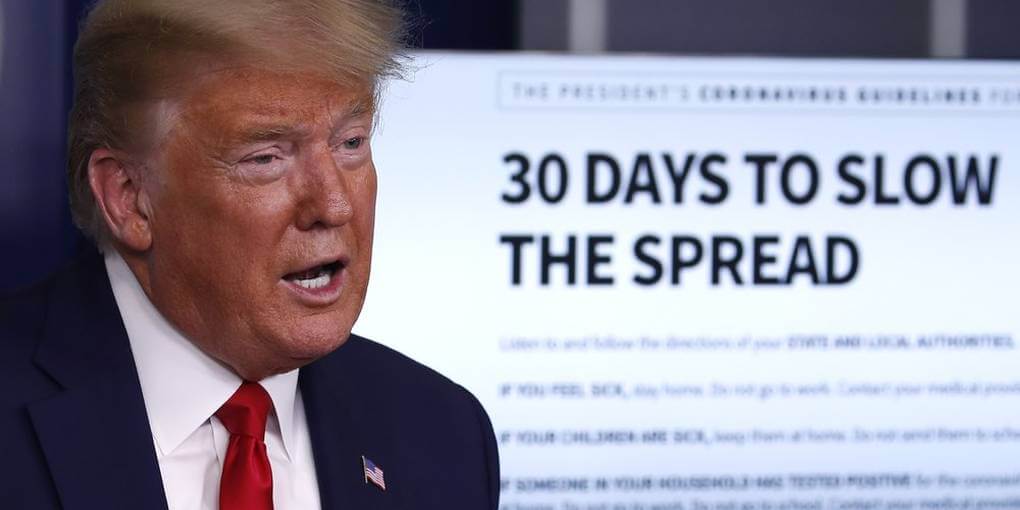 Washington – US President Donald Trump has sworn Americans to historically difficult times and dramatic casualties in the near future because of the Corona epidemic.

“The next two or three weeks will be one of the most difficult we’ve ever had in this country,” Trump said in the White House. “We will lose thousands of people.” The White House fears between 100,000 and 240,000 deaths in the United States from the coronavirus, despite measures to contain it.

The USA as the frontrunner in the pandemic

Trump was in a dark mood at the press conference on Tuesday evening at the White House – unlike last week when he pretended the slogan that the US should function largely as before the virus again until Easter Sunday. “I think that’s absolutely possible,” he says at the time. At the time, he mainly warned of the consequences for the US economy. Predictions have now changed his mind, predicting deaths such as “in world wars” (Trump).

THE ECONOMY AND PROTECTIVE MEASURES

The conflict, which the US President made clear again on Tuesday evening: There are people around him who are pushing him to declare the USA open for business again – that is, open to doing business again. The experts in the White House Coronavirus Working Group are facing this: the coordinator and doctor Deborah Birx, and the director of the National Institute for Infectious Diseases, Anthony Fauci.

Birx presented the forecast with up to 240,000 deaths on Tuesday evening at a press conference with Trump in Washington. The doctor emphasized that they were working to keep the number down. However, the shocking range is within the realm of possibility. When asked by a reporter, Fauci said whether the Americans had to prepare for 100,000 deaths: “The answer is yes, however sobering this number is. We should be prepared for it. ” He continues to hope that this number will not become a reality.

TRUMP AND THE SCIENTISTS

Birx and Fauci are now considered nationwide as reason voices in the crisis. And even if Trump is otherwise not known as someone who gives a lot to scientists – in the case of the Corona crisis, he is now listening to them, as the extension of the protective measures until the end of April shows. At the press conference on Tuesday evening, it was remarkable how often he left the podium to the two experts – instead of giving himself dubious answers that exactly these two doctors had to backtrack in the past.

Trump said in the White House that without measures to curb the coronavirus, between 1.5 and 2.2 million deaths in the United States were feared. He knew that his government’s protective measures would pose challenges for the Americans. But it is a “question of life and death” to follow the guidelines. “We are at war with a deadly virus,” warned Trump, who now regularly tries to compare wars. “Things are happening in this country that we have never seen before.”

TRUMP AND THE FLU COMPARISON

Trump’s shift in opinion may also be due to the fact that he now has friends of his own who are hospitalized with COVID 19 diseases. He mentions that every day and he’s visibly shocked by it. Nothing is left of Trump’s previous downplaying tactic when he tried to downplay the dangers posed by the virus. The comparisons with the flu, which he contracted last week, are at least for the moment passe. “It’s not the flu,” he says now. “It’s malicious.”

STILL A LACK OF TESTS

Trump’s initial refusal to take the threat of the novel coronavirus seriously has cost the United States valuable time, as has the fact that the country came in for testing far too late. Nevertheless, Trump is still unwilling to admit deficits in dealing with the crisis. On Tuesday evening, he again emphasized that the US had now tested more people than any other country in the world. He did not answer the question, why still not everyone who needs a test still gets it. Trump had made a full-bodied promise more than three weeks ago: “Anyone who needs a test will get a test.”

The state of New York remains at the center of the epidemic in the USA. Its governor conceded omissions in the fight against the virus. “We underestimated the virus. It’s stronger and more dangerous than we expected, “said Cuomo at his daily press conference. “I’m tired of running after the virus. We were behind from the first day and had to catch up – so you don’t win.