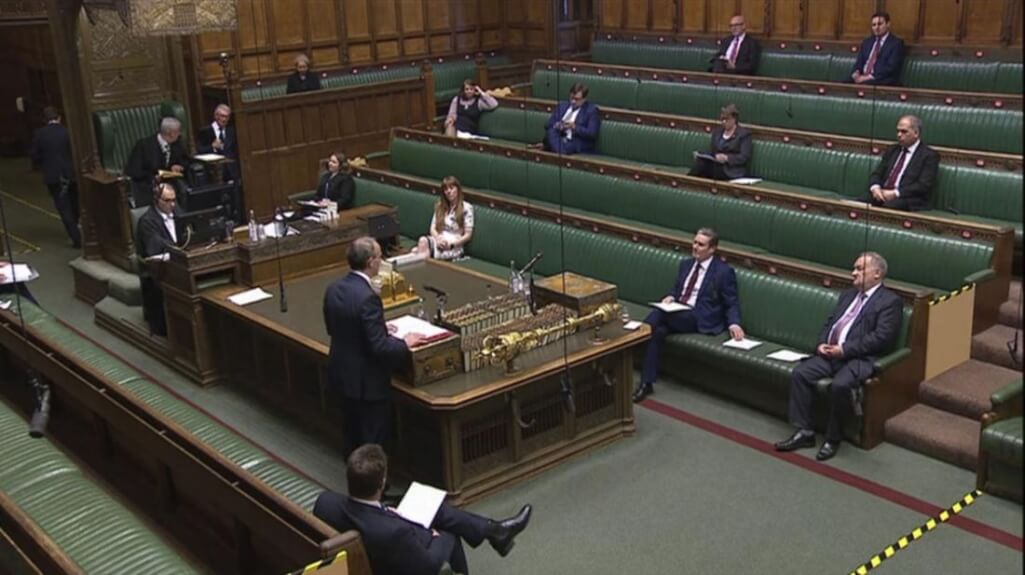 In the British House of Commons, day-to-day business is characterized by bizarre rules and unwritten customs that often go back centuries. In this respect, it was a minor revolution that Parliament held a so-called hybrid debate on Wednesday after a forced break forced by the Corona crisis. Only a few MPs were allowed to be physically present in Westminster, and they had to be spread over the parliamentary benches at a great distance. Most parliamentarians participated in the weekly Prime Minister’s Question Time via a video link from the living room or from the kitchen of their home, and their speeches were broadcast on large screens in the hall.

As Prime Minister Boris Johnson is still recovering from his severe Corona disease at Checkers’ country estate, he was represented during Foreign Minister Dominic Raab’s question-and-answer session in the hall, who is interim head of the government’s day-to-day business. Opposite him, the newly elected Labor Party leader Keir Starmer sat on the opposition benches for the first time.

Starmer had announced that the opposition, under his leadership in the corona crisis, would forego partisan games. Now he acted soberly but put his finger specifically on those sore spots that bring Johnson’s team in need of explanation. “The government was slow in imposing a curfew, slow in the corona tests, slow in the procurement of protective equipment, and slow in answering private-sector production offers,” said Starmer relentlessly. Raab replied that the government had followed the recommendations of the senior health official and the head of the scientific service at all times.

Egg dance around the EU program

In fact, in the past few weeks, there had been the impression that the government was constantly chasing developments. Protective clothing, masks and glasses for health workers are still lacking, leading to desperate calls for help from doctors and nurses. A full-bodied delivery of protective articles from Turkey was delayed for days, production and delivery offers from smaller British companies remained unanswered for a long time. The government was also unhappy when it came to procuring ventilators. A top official had said earlier this week that, against the backdrop of Brexit, “for political reasons” the cabinet had decided not to participate in an EU procurement program. He later clawed back in a written statement, stating that London had not received the invitation to participate due to “communication problems” – which was on Wednesday again denied by the EU Commission has been.

While heated debates raging in the United States and in many European countries about the enormous economic costs of the restrictions, the end of the curfew in the House of Commons, which lasted until at least May 7, was not a major issue. There are, however, more and more reports in the British press that the government itself is divided over the pace of the exit strategy. Unlike Chancellor of the Exchequer Rishi Sunak and Cabinet Minister Michael Gove, Boris Johnson should prefer a more cautious course under the impression of his own corona disease.

There is currently no absolute emergency in the UK. The state health service NHS groans under the burden of the pandemic, but the hospitals have not reached the limits of the capacities that the government has increased in time. The curves of new infections and hospital admissions indicate that the country has reached the peak of the epidemic. But it continues to do so Number of over 18,000 corona deaths to date in UK hospitals one of the most affected countries in Europe.

The way out of the lockdown should lead to a high capacity of tests to quickly and quickly identify new infections. But here, too, the government is lagging behind its targets. At the beginning of the month, Health Minister Matt Hancock announced that 100,000 tests would be available daily by the end of April. Starmer calculated that the capacity would only amount to 40,000 tests per day and that, due to distribution problems, only 18,000 tests could have been carried out effectively recently. The government officially maintains its target. However, if this is clearly missed by the end of the month, it is conceivable that Hancock would have to jump as a pawn sacrifice for the government’s failures.

“Bucha” photos affected the negotiations of Russia and Ukraine