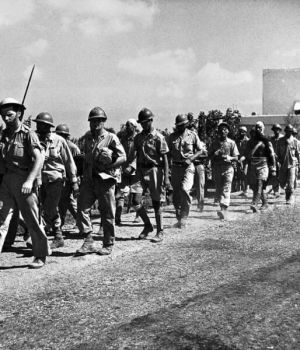 Both the Nazis and the Allies campaigned for Arab support in World War II. The independence efforts fueled by this could no longer be stopped after 1945.

On May 8, 1945, Europe celebrated the victory over fascism. In the Damascus bazaars, however, the atmosphere was tense. Thousands had taken to the streets in the past week to call for the end of French rule. The situation escalated during the victory celebrations on May 9th and 10th. Syrian demonstrators, backed by returning Arab colonial soldiers who felt cheated out of victory, crowded the city’s boulevards with slogans promoting the liberation of Syria and other foreign-dominated countries in the Middle East. The protests soon spread to other cities.

The French under the newly appointed military governor of Damascus, General Fernand Francois Oliva-Roget, reacted with all harshness. Martial law was proclaimed. Three weeks of violent clashes followed. On May 29 and 30, the French Air Force bombed parts of the city center of Damascus, including the Parliament. Between 600 and 2000 people died; the exact number of deaths is unknown since the French threw their bodies into mass graves. The protests marked the beginning of the end of French rule in the region. A year later, on April 15, 1946, the last French soldier left the Levant.

Similar scenes as in Damascus took place in the entire colonial world in the weeks after the end of the war. World War II was probably the most important historical turning point of the 20th century in the Middle East: it initiated the end of the hegemony of the old colonial powers Great Britain and France in the region.

Before the war, large parts of the region were under European rule. France was a mandate in Syria and Lebanon. Britain controlled, directly or indirectly, Egypt, Palestine, Transjordan, and Iraq, and beyond these areas had tremendous imperial influence throughout the region. After the war broke out, when the Allies fought against the Axis powers in North Africa, the Middle East was increasingly drawn into the conflict. The region was not only strategically important because of its oil fields, but also because of its geopolitical location. After the invasion of the Soviet Union in the summer of 1941, Hitler developed the plan to let the Wehrmacht advance into the Middle East from both North Africa and the Eastern Front – via the Caucasus.

At the same time, Berlin supported the uprising of the axis-friendly politician Rashid Ali al-Kilani in Iraq. However, the coup was quickly thwarted by the British army. Al-Kilani fled to Berlin. Besides, British units and troops General de Gaulles occupied the territory of Syria and Lebanon controlled by Vichy France, while British and Soviet troops occupied independent Iran. The Middle East was now firmly under Allied control.

The Second World War gave a strong boost to efforts to achieve independence in the Arab world. The Nazi regime’s anti-colonial radio and leaflet propaganda, aimed at destabilizing the areas behind the front, raised hopes among nationalist anti-colonial movements. When Rommel entered Egypt in the summer of 1942, Berlin’s Arabic-language propaganda broadcaster declared that Hitler would not only guarantee “Egypt’s independence and sovereignty”, but would also liberate the “entire Middle East” from the “British yoke”.

German propaganda declared the Nazi regime the patron of national liberation movements in the Middle East. These efforts were supported by anti-colonial Arab leaders who sought refuge in Berlin during the war. The most important of them was the infamous Mufti of Jerusalem, Amin al-Husseini.

But the Allies also promised independence during the war to gain the support of the Arab world. Their propaganda portrayed the conflict as an existential struggle for freedom and democracy and against tyranny and dictatorship. The Atlantic Charter, which was ratified in the summer of 1941, guaranteed “the right of all peoples to adopt the form of government under which they wish to live “, And promised to restore” the sovereign rights and autonomous governments of all peoples robbed of them by violence “in the post-war order. The words were obviously in conflict with realities in the Middle East. And yet they raised hope of early independence under anti-colonial movements.

Anti-colonialism, which was fueled by promises from all sides during the war, could not be suppressed in the post-war period. The old world order was history. This was demonstrated not least by the Arab protests after May 8, 1945. But not only the promises made during the war years played a role. The war led to structural changes that were difficult to reverse. Anti-colonial nationalism now affected almost all parts of society.

At the same time, the war burden had destabilized the British and French imperial powers economically and politically. The conflict had also led to a crisis of legitimacy: barbarism in Europe had shaken confidence in the merits of Western civilization. The idea of ​​superiority, fundamental ideological justification for European imperial rule, was destroyed. George Orwell had raised on the eve of the war how his country could “fight fascism” while maintaining the “much greater injustice” of its British Empire.

As a result of the war, many Arab states in the Middle East became independent. The Syrian Republic was proclaimed in 1946. In the same year, Jordan became completely independent of the British crown. Lebanon had officially become independent during the war in 1943. In 1948, Great Britain withdrew from Palestine. And in the 1950s, Iraq finally freed itself from British influence.

A special chapter in this story is the Palestine conflict. Zionist immigration to British-controlled Palestine had risen sharply in the interwar period and was seen as an attempt by Europe to colonize the country. This led to growing resistance, which peaked during the Arab uprising of 1936-1939. During the war, the Nazi regime tried to further fuel the conflict with anti-Semitic Arabic-language propaganda. As part of independence in 1948, the first Arab-Israeli war broke out and the country was divided.

The Second World War and the Holocaust played an important role in the Israeli-Palestinian conflict in the post-war years. The Arab Holocaust discourse was complex from the start, as the Middle East historians Meir Litvak and Esther Webman made clear in their standard work on the topic “From Empathy to Denial”. At first, it often expressed empathy and solidarity. Later there were increasing attempts to use the memory of history in the context of the Middle East conflict. Justification, small speeches, or denial of the Holocaust (and the equation of the Holocaust with the oppression of the Palestinians) increased and are still widespread to this day.

The reasons for this are diverse. For one thing, opponents of Israel in many Arab countries have the notion that the Holocaust led to the founding of Israel in 1948 and that the Palestinians to a certain extent paid the price for German crimes. Of course, this is too short: The Zionist movement is much older. And already in the First World War, the great powers – above all Great Britain in the Balfour Declaration – made promises regarding a Jewish state in Palestine. Besides, the Holocaust has been of major importance in Israel’s political discourse since 1948. To challenge the National Socialist extermination of Jews, therefore, seems to the opponents as a suitable means to attack the state at its foundations.

But there were always other Arab voices. The Israeli-critical Palestinian-American intellectual Edward Said, for example, emphasized “recognizing the Jewish experience with all its horror and fear”. Understanding this past would underpin your humanity and help ensure that a disaster like the Holocaust is never forgotten and never repeated. The debates about the Holocaust and World War II are still present in the Arab world. Arabic and European history of the 20th century are revealed here like under a burning glass.

David Motadel is Professor of International History at the London School of Economics and Political Science (LSE). His book was published in 2017 “For prophet and leader. The Islamic World and the Third Reich “.

The Second World War ended 75 years ago. Countries around the world were affected by the disaster, which claimed at least 55 million lives. In our series of articles, we focus on less known locations. We look at states and regions that are often neglected in the Western culture of remembrance but have been implicated in the World War many times – with consequences to this day.