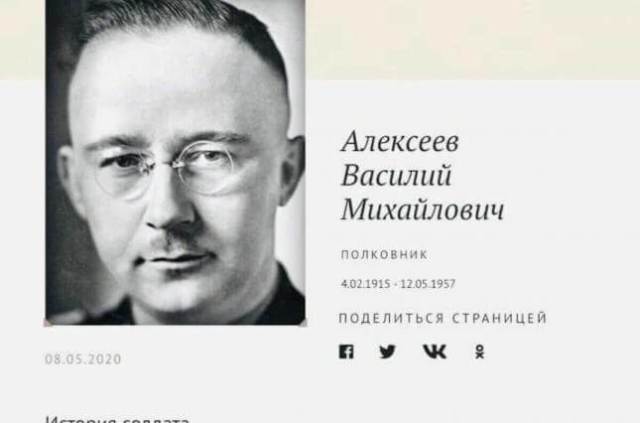 During the “Immortal Regiment” campaign in Russia, which this year took place remotely because of the coronavirus epidemic, someone posted a photo of the Nazis. Four guilty individuals have already been found in Russia, but the Investigative Committee of the Russian Federation accused Ukraine and Estonia of this conspiracy.

As proposed, anyone could upload photos of relatives of veterans, after which they appeared on the Internet, on television, and on media screens in the format of virtual moves. However, during the rally, a photo of SS Reichsfuhrer Heinrich Himmler suddenly appeared with the signature “Colonel V. Alekseev. Also, on the Memory Bank website, there was a questionnaire with a photograph of Hitler and a comment that it depicts a member of the Great Patriotic War “Hitler Adolf Alois”.

Danil Simonov from Perm, Andrei Shabanov from Samara, Denis Vorontsov from Volgograd, and also Vyacheslav Kruglov from Ulyanovsk were detained for publishing the photos.

According to the Investigative Committee of Russia, “the study of materials, items, and computer equipment seized during the searches give the investigators reason to believe that all these individuals were in the same communities on social networks.”

“In addition, other episodes of similar crimes were identified as part of the preliminary investigation. Among those involved in the rehabilitation of Nazism there are people who posted photos of Nazi criminals from foreign countries, in particular Ukraine and Estonia,” the committee said.

Earlier, the traditional action “Immortal Regiment” was decided not to be held in Minsk. Non-governmental organizations planned that about 5 thousand people should take part in the event, despite the epidemic of coronavirus, but local authorities refused them.

However, Belarus could not refuse the parade, becoming the only post-Soviet country that held it all the same.