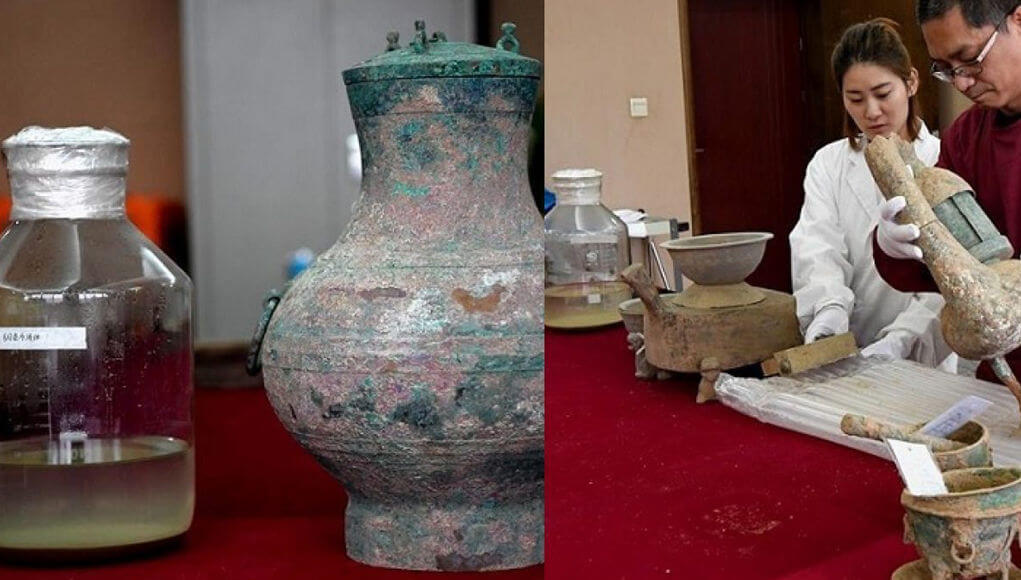 An ancient bronze vessel with unknown liquid was discovered in a tomb in Central China. Archaeologists believe that this is the “elixir of immortality”, popular in its time.

As the Eastern Herald was told at the Institute of Cultural Relics and Archeology of Luoyang City, Henan Province, the tomb dates from the reign of the Western Han Dynasty (202 BC – 8 AD). She was found on the construction site in April. Excavations are being carried out there with the approval of the State Administration for the Protection of the Cultural Heritage of China.

Mayan civilization: The largest and the most ancient construction found in Mexico

A set of bronze items was found in the burial room: a vessel, tripod, plates, etc. The material from which they are made indicates that their owners belong to rich sections of the population.

According to Shi Jiazhen, director of the institute, the liquid contained in the vessel is either wine or a kind of “drug for immortality”. The scientist explained that this version of his colleagues was prompted by a colored mural depicting a horse-hunting scene.

“The characters in the figure look like a living, and the birds and trees are clearly not drawn according to real patterns, the figure itself actually shows the image of an imaginary life in the kingdom of celestials,” Shi explained.

The found tomb is a complex of five L-shaped burials. Apparently, this is a family crypt. Who owned the tomb has not yet been established.

Earlier, a bronze vessel containing a solution of alunite was discovered in Luoyang. According to the religious and philosophical trend of Taoism, these kinds of drugs helped people become immortal.

Belief in the existence of the afterlife was widespread in the Middle Kingdom about two thousand years ago. Representatives of the high society of those times were convinced that there are wonderful preparations – usually based on minerals – that will give them immortality. Such a cultural phenomenon was not only described in historical records but was also reflected in archaeological finds.