Alexei Navalny, a Russian opposition figure, was poisoned with the neurotoxin novichok, according to a study by the Organization for Chemical Weapons (OPCW). The agency confirms the findings of the German and other Western governments.

OPCW experts analyzed the samples they took from Navalny, who became seriously ill on board a Russian plane in August. A statement from the agency says that the results were in accordance with the research of the Germans, French, and Swedes that he was poisoned novichok, a nerve goat that was developed in the Soviet Union.

Fernando Arias, the OPCW’s executive director, said the results were a matter of serious concern. The Russian government has not responded to the agency’s statement.

Dmitry Peskov, a spokesman for Russian President Vladimir Putin, said his government needed to review the report first. Russia has previously denied involvement in Navalny’s illness and has not seen any reason to investigate it.

“This once again unequivocally confirms that Alexei Navalny was the victim of an attack with neurotoxin from the novichok group,” German Chancellor Angela Merkel’s spokesman Steffen Seibert said of the OPCW’s findings.

Navalny fell ill on August 20 and fell into a coma. He was subsequently taken to a hospital in Berlin at the request of his relatives. He stayed there for about a month before graduating. Navalny himself says President Putin has been poisoned by Russia’s parliamentary elections. He has been one of Russia’s main opponents in recent years.

The British government accused the Putin government of using novichok to poison Sergei Skripal, a former Russian spy, and his daughter in the English town of Salisbury in 2018. Nicola Stewart, Britain’s deputy permanent agent at the OPCW, lamented today that the chemical weapon had been used again.

“We are shocked that this is happening again in the rest of the world,” Stewart said.

A British woman died when she came in contact with the remnants of the neurotoxin left behind by Russian scouts in Salisbury.

© The Eastern Herald
If you still got here …
… means that you liked the article or are concerned with the subject. We want to come up with as many articles as you can read to the end. Now you can tell the journalists directly what you want to read and in what format. We keep journalism NOW open to all. Simply visit contact us and let us know about it. We have no oligarchs or politicians behind us and no one dictates to the publisher how to write about one subject or another. Your support will help us maintain this independence. Any contribution, no matter how big or small, is extremely valuable to us. Support NOW today with only $10 per month. Thank you.

Who is Armin Laschet? He loves carnival, and last year he infuriated Angela Merkel 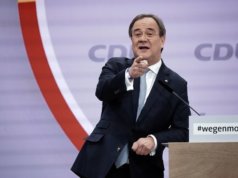 This is the content of 17 executive orders signed by Joe...

EU Leaders today on solidarity regarding the delivery of vaccines

President Donald Trump Delivers Farewell Address – “I took on the...

Trump pardoned 73 people, but did not pardon himself

Thailand sentences a woman to 43 years for insulting the monarchy