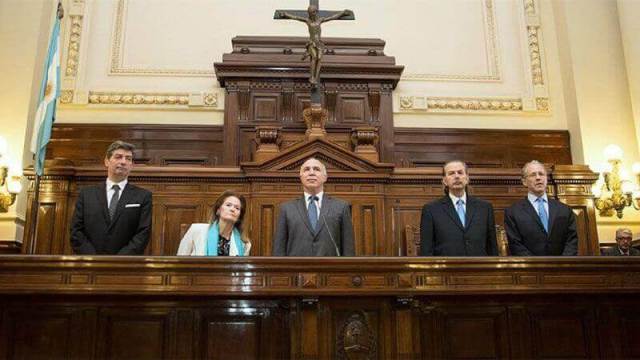 The Supreme Court of Justice ended its Tuesday meeting today without having reached an agreement on the per saltum presented by the judges displaced at the initiative of the ruling party, so will continue to analyze the case in the coming days.

It’s about the judges Germán Castelli, Leopoldo Bruglia, and Pablo Bertuzzi, whose situation the Court did not define and in an eventual agreement next Thursday it could deal again. The highest court must determine whether to keep them in their designated positions during the government of Cambiemos or it returns them to their original functions, as promoted by the ruling party.

Court sources assured that next Thursday could be set as another day of the agreement to deal with the merits issue, although the Court does not have deadlines and gave a 30-day license – which expires at the end of the month – to the magistrates in question to solve in that time.

The Acting Attorney General Eduardo Casal days ago he gave his opinion that the three judges must be kept in their appointed positions during the macrismo, which would imply a judicial setback for the ruling party, which prompted their displacement because they considered that they did not have the agreement of the Senate when it was resolved in the government of Mauricio Macri.

For its part, in another presentation, the Council of the Magistracy ratified its position, adopted based on the ruling majority, that the judges should return to their original positions.

For now, the displacement voted by the Senate of the Nation remained on standby pending the decision of the Supreme Court of Justice.