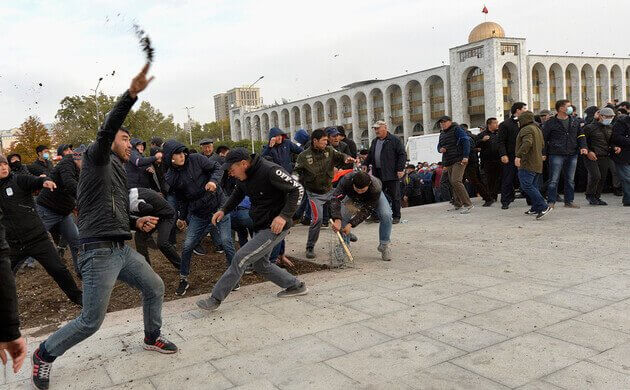 In the capital of Kyrgyzstan Bishkek On October 10, a curfew was introduced.

The goal of imposing a curfew from 9:00 pm to 05:00 am in an attempt to quell mass protests in the city, says decree press services of Bishkek Police on Facebook.

All citizens, except for officials and security officials, must obey the curfew requirements.

“The coronavirus applies to all citizens and stateless persons, with the exception of state and municipal employees who work, and contributes to the activities of the commandant’s office,” the department noted.

Also, in Bishkek, a ban is introduced on the sale of weapons and alcoholic beverages from 18:00, rallies, meetings, and street processions are prohibited. At the same time, a special regime of entry and exit has been introduced in the city.

On the morning of October 10, columns of armored personnel carriers and trucks with soldiers were sent to Bishkek. Military equipment has moved to the presidential residence, where the parliament meeting is to be held.

On the eve of the power of Kyrgyzstan announced a state of emergency in Bishkek… The military must organize checkpoints, stop armed clashes, and ensure the protection of law and order and the protection of civilians.

For six days in Bishkek, mass rallies of those who disagree with the results of the parliamentary elections, which took place on October 4, continue. After clashes with security officials, the protesters seized the building of the country’s parliament and presidential administration.

After the announcement of the preliminary results of the parliamentary elections in Kyrgyzstan, several opposition parties declared non-recognition of the results due to massive violations and falsifications during the electoral process.

On the evening of October 5 at Ala-Too Square in Bishkek gathered about five thousand who do not agree with the results of the parliamentary elections. Protest actions were held in the cities of Naryn and Talas.

The rallies escalated into clashes with security officials and the storming of the “White House” – a building in which hosts the Presidential Administration and the parliament of Kyrgyzstan. To date, the building has been destroyed and burned out by fire, as a result of the protests 1,000 people were injured (there are wounded both among the security forces and among the protesters), and one more person died.

On October 6 CEC invalidated the results of parliamentary elections in Kyrgyzstan.