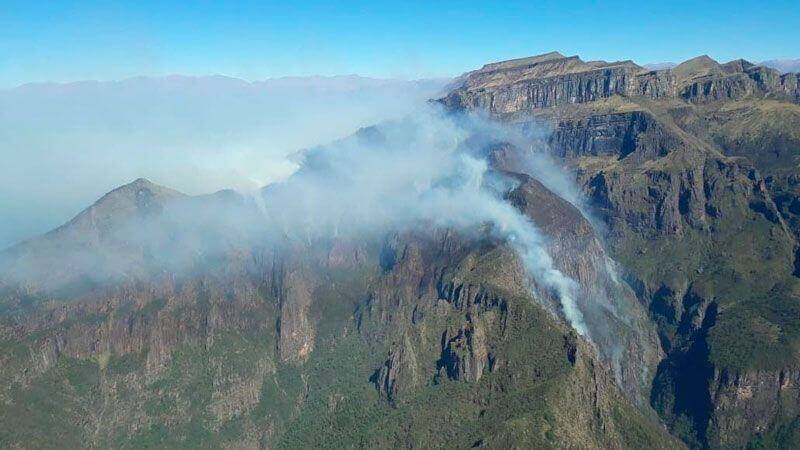 The fire does not give truce in the Yungas of Jujuy. Sunday marked a month since the fire started, although on Friday the outlook was a bit “encouraging” due to the low temperatures, the different foci continue to advance so more than 11 thousand hectares have already been consumed.

Of these, 3,340 correspond to the Calilegua National Park, which means that 3.4% was consumed by the flames.

Eight provinces continue to have active fire sources, while three others managed to extinguish the flames in recent days, reported the National Fire Management Service (Snmf).

In Jujuy there are active fires in La Unión Seca (next to the Calilegua National Park), Ledesma, Santa Bárbara and Fraile Pintado, while the flames in San Salvador are extinguished.

It should be remembered that within the National Park there are two major fire sources, La Unión Seca (Zanjón Seco) that began on September 18 and in Arroyo Yuto, whose focus began between 9 and 10 of this month. These outbreaks began outside the limits of the protected area, on farms and private properties in the area. Brigade members, park rangers and firefighters work at the site, in addition to the 2 hydrant planes assigned by the National Fire Management System.

From the leadership of the Incident Command, made up of the National Parks Administration (Directorate for the Fight against Forest Fires and Calilegua National Park), the National Fire Management System and the Forest Fire Directorate of the Jujuy province, they have managed greater resources for emergency care. Thus, on Thursday, October 22, 44 brigade members will arrive in the province to join those already working on the claims.

It is also waiting for the authorization and assignment of a helicopter with a helipad to fight the fires in a more targeted manner.

Currently, more than 300 people work in the field, logistics, and technique. It has a helicopter to carry out overflights and 2 fire hydrant planes.

Local institutions also accompany this emergency through the Coem, Libertador General San Martín, Calilegua and Yungas. And the community as a whole, through the countless donations that have been made.

It should be noted that all solidarity actions focused on donations are initiatives of individuals or entities that on their own seek to contribute to the cause. This means that there is no donation campaign promoted by the Government.

Temperatures that will reach 36º

High temperatures are once again protagonists in San Salvador de Jujuy and its surroundings. With marks that would reach 36º in the course of the week. The province is going through intense days of heat in recent days, a factor that does not contribute to the work of the brigade members who, tirelessly, continue to fight the flames that have already affected more than 11 thousand hectares.

According to the National Meteorological Service for today, Libertador General San Martín would register a maximum of 34º with the probability of isolated storms during the afternoon-night and on Saturday the highest temperature of the week would be registered with 36º. For the Jujuy capital today a maximum of 34º is expected and also with the probability of isolated storms.