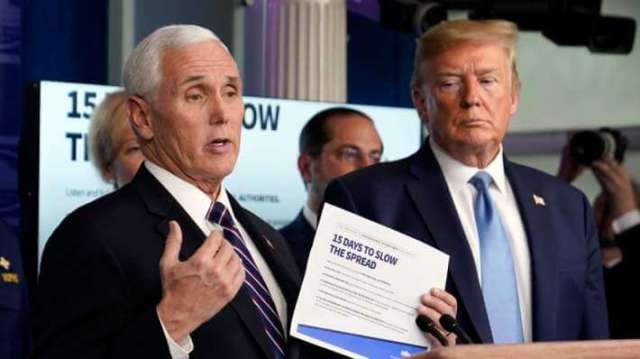 In the Corona crisis, calls for easing sanctions against Iran are increasing as they hinder the import of important medicines and medical devices. The US alone blames the regime for the plight.

The pressure on the American government worldwide to relax its sanctions against Iran in the corona crisis has been growing for weeks. The demands on President Donald Trump are increasing in politics and the media to temporarily suspend the severe financial and trade restrictions so that Iran can import much-needed medicines and medical devices. Washington remains tough, however, and claims that the sanctions will not prevent Tehran from fighting the epidemic.

Iran was hit by the plague early on. Chinese students or workers probably carried the pathogen to the Iranian pilgrimage city of Qom in January, from where it spread rapidly across the country and the Middle East via Shiite believers. To date, more than 67,000 people in Iran have fallen ill and over 4,000 patients have died of Covid-19, according to official figures. However, the World Health Organization assumes that the number of victims will be much higher.

The reluctance of the leadership in Tehran and the weeks-long cover-up of the epidemic have contributed significantly to the spread of the virus. However, many politicians, researchers, and human rights defenders are partly to blame for the American sanctions that the Iranian health system is overwhelmed by the epidemic. For years, the sanctions would have prevented important medicines and medical devices from entering the country.

“Even if the maximum pressure from the United States was never intended to kill, the sanctions affect the performance of the Iranian health system,” wrote a group of well-known politicians around former US Secretary of State Madeleine Albright on Sunday in a joint call to relax sanctions. The appeal was co-signed by 24 politicians from the United States and Europe, including four former NATO general secretaries.

Despite humanitarian exceptions, the sanctions would make the importation of drugs, medical devices, and raw materials for the production of these goods “slower, more expensive and more complicated”, the signatories point out. Many suppliers would shy away from doing business with Iran for fear of violating sanctions. Aid deliveries were not enough to meet the need; Politicians demanded that imports through commercial channels be necessary.

However, the US assures that the sanctions imposed since May 2018 are not an obstacle to aid reaching Iran. The sanctions provided broad exemptions for the export of food, agricultural goods, medicines, and medical devices to Iran – also by companies from the USA, the US State Department said on Monday as Responding to growing calls to ease trade barriers.

From the American government’s point of view, the regime in Tehran is actually behind the demands of Western politicians, activists, and journalists for facilitating trade. “Iran’s clever PR campaign abroad to ease sanctions does not aim to relieve the Iranian people or their health, but to raise funds for its terrorist operations,” the State Department said in a fact sheet.

The Iranian regime has spent billions to support its “terrorists” in the region for years, while the health system remains underfunded. If Tehran calls for sanctions to be lifted, it is not about access to medicines, but about money, the State Department criticized. In truth, the regime has both enough money and opportunities to buy humanitarian goods abroad.

It is certainly true that Tehran would have enough money if it used its military expenditures for health care. But the question is whether more money alone can solve the problem. According to Human Rights Watch (HRW), the American sanctions regime provides exceptions for the export of humanitarian goods to Iran. However, a special permit is still required for the export of certain vaccines and medical devices.

This means that the export of certain equipment that is central to the fight against the virus requires special licenses, the human rights organization said on Tuesday. And these are issued less and less. The Iranians were already punished with “a brutal, selfish regime,” wrote HRW director Kenneth Roth. It was “wrong and hard-hearted” that the United States also denied them access to urgently needed medical goods.

All appeals have so far gone unheard

Human Rights Watch had documented last year how the sanctions hindered the importation of important medicines because, despite the nominal exemptions for humanitarian goods, they made it difficult to do any kind of business. In this context, the US points out that with the Swiss Humanitarian Trade Arrangement (SHTA) a payment channel has been available since January to handle humanitarian trade with Iran.

However, the establishment of the Swiss payment channel is the implicit admission that the sanctions do indeed hinder trade in humanitarian goods. Because if this were not the case, there would also be no need for a separate payment channel. The US reasoning that the economic blockade imposed on Iran has no negative effects on the health system is, therefore, becoming less and less convincing to many.

In the United States, at the end of March, two dozen Democratic members of Congress, including Bernie Sanders and Elizabeth Warren, in a letter to the State Department the easing of sanctions against Iran and Venezuela. They recall that the United States used to do this repeatedly after the earthquake in Iran. Democratic presidential candidate Joe Biden is also urging the Trump administration to facilitate the trade-in humanitarian goods.

The UN Secretary-General António Guterres and the UN Human Rights Commissioner Michele Bachelet demanded the lifting of sanctions in the Corona crisis in mid-March. France, Great Britain, and Germany are already rejecting the sanctions imposed after the US’s withdrawal from the international nuclear agreement with Iran and are committed to continuing trade – albeit with very limited success.

Trump’s government, however, is completely unimpressed by the calls to relax sanctions and tightened it even further in March. Hardliners in Washington are pressing to maintain pressure right now, as the regime may be on the verge of collapse. The regime is struggling with a deep legitimacy and economic crisis. Predictions about its imminent end have often proven to be wrong.