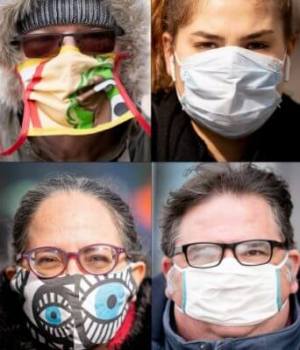 In the West, the mask stands for deception and pretense. But it is just now becoming a symbol of hope – and can thus help to overcome unnecessary cultural struggles.

We save the face or we lose it. In language usage, indeed throughout European cultural history, the undisguised face stands for the identity of a person. In the Renaissance, portrait painting on panel paintings was created here, which supposedly shows undisguised faces. In contrast, the mask has been used in this country since it was used in the theater of the ancient Greeks, as a symbol of pretense, even deception. This is how it is worn at carnivals. And if it appears in art, it usually has a shady meaning. The assumption is: Whoever wears a mask or otherwise covers his face does not fight with an open visor, he or she takes on a role, hides, has something to hide.

This millennium-old way of thinking of the old continent must be visualized in order to understand how radically new it is when politics and science now encourage hygienic reasons to wear masks and start sewing machines in the city and the country. If hardship and insight are only large enough, long-practiced cultural patterns can change quickly.

After all, masks can also be defined differently than is customary in the European tradition. In Asia, covering your nose and mouth in public is not considered aggression, but a sign of consideration. And in many ancient cultures, the mask has a positive spiritual meaning. Some of the deads of late antiquity carried plaques with their faces in front of their faces. In Papua New Guinea, which has not yet been missionized, dancers slipped into elaborately carved and braided sleeves that served the cult of ancestors. A mask can have many meanings. Whether it triggers more positive or more negative feelings is not natural, but cultural.

In Germany and Central Europe, body covering has sparked emotionally led cultural struggles in recent years. Already the headscarf of Muslim women, and even more so the veil were the number one topic of debate, followed by the handshake, which was seen as the ultimate expression of free, democratic life – and has now even more than an uncovered mouth as a virus thrower has fallen into disrepute. This leads to the absurdity that naturalizations had to be stopped in Denmark for reasons of hygiene because the handshake was mandatory at the ceremony in pre-corona times.

Now is the time to disarm ideologically. The corona crisis is a very real problem, which distinguishes it from many exciting issues of recent years, in which different lifestyles and political attitudes have been negotiated. Governing federal and state politicians are well-advised not to ideologically exploit the pandemic. They can gather large sections of the population behind their health policy because they are not making a cultural struggle out of the fight against pandemics, so they do not blame “foreigners”, “globalization” or any other imaginary enemy.

So this crisis of all things can help to overcome the division of society. Pragmatic protection of history is the first courageous step. The mask can be reinvented: from the symbol of isolation, it becomes a beacon of hope, a harbinger of a victory over the plague.