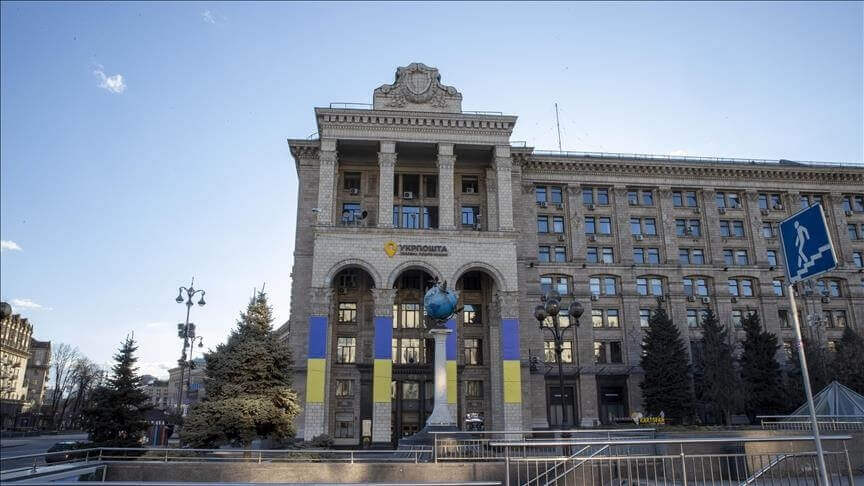 Most of the Middle Eastern countries sought to adopt a neutral position on the Russian military intervention in Ukraine, and not take sides in the war, hoping not to anger Russia, or the United States, which seemed to be an original party in the crisis.

For years, some partner countries or allies of Washington have tended to build a network of relations with Russia or China, after the administration of former President Donald Trump showed its abandonment of standing by its allies in the face of Iranian threats, and the Joe Biden administration continued to implement the policy of former President Barack Obama, Which adopted disengagement from the issues of the region, and the trend towards the supposed hotbeds of threats to American national security in East Asia from China and Russia.

For decades, the relations of the active countries in the region with the United States remained alliances and partnerships in military and security files, and a huge market for American weapons, while Russia became, for years, a trading partner and a major source of arms supplies to the countries of the region and a true partner of Saudi Arabia in controlling oil prices in the global market.

Saudi Arabia rejected several requests made by the US administration to increase oil production, limiting the gradual rise in the price of one barrel, which, according to the latest data, exceeded the ceiling of 119 dollars, while the average price of Brent crude, which is the international pricing standard, reached 79 dollars per barrel in the last quarter of the year 2021.

Egypt relies on Russia to supply weapons in addition to coordinating to preserve its interests in Libya, as Russia plays an important role in the Libyan conflict file.

Many Arab countries believe that the war in Ukraine will reveal the truth of Washington’s commitment to defending its allies such as Ukraine, and its willingness to change its policies in the Middle East, and to defend its allies if their countries are exposed to the dangers of external military threats, after Trump abandoned the defense of Saudi Arabia, whose facilities were exposed On September 14, 2019, there were attacks that caused a partial disruption of oil production.

The Obama administration had previously set red lines in 2013 on the Syrian regime’s use of chemical weapons, without Obama implementing his threats after the regime forces launched chemical weapons attacks on towns in Eastern Ghouta in Damascus countryside, and the regime’s return to launching similar attacks on Khan Sheikhoun in 2017, Trump responded to the attacks with limited missile strikes on the Shayrat airbase without causing any real damage.

In an atmosphere of internal incompatibility, the Lebanese Foreign Ministry condemned the Russian war in Ukraine, contrary to the positions of “Hezbollah”, which objected to the ministry’s position.

On the public level, the Arab street is still witnessing a sharp division between a trend that welcomes what is happening to the Ukrainian people, out of hostility and opposition to American policies in the region with regard to what is known as the “Axis of Resistance,” or to defy the United States, which has abandoned its allies for Arab and Gulf people. Its governments have had strategic alliances with Washington and a partnership in the war on terror in Iraq and Afghanistan.

On the other hand, the Arab street is expanding to a trend that seemed to be expanding more in opposition to the Russian war in Ukraine, at the same time making comparisons with the American intervention in Iraq and its occupation, and also rejecting foreign interference in all its forms in Libya, Syria, Yemen, and Iraq.

They believe that the war revealed Western double standards towards Arab and Muslim issues, and the hypocrisy of the international community that stood silent or in support of the US invasion of Iraq, at the same time that it rushed to issue resolutions condemning the Security Council and the United Nations General Assembly, and imposing international sanctions on Russia within less than A week after the start of the Russian military operation in Ukraine, without imposing similar sanctions against the Russian intervention in Syria since 2015, which has caused the deaths of tens of thousands and the displacement of hundreds of thousands of Syrians.

Arab countries, including the six Gulf states, Egypt, Jordan, Yemen, Libya, Tunisia, Comoros, Mauritania, and Somalia, in the absence of Lebanon and Morocco, voted in favor of a resolution condemning the Russian intervention in Ukraine, which was adopted by the United Nations General Assembly on March 2, with 141 votes in favor.

Five countries opposed the resolution: Russia, Belarus, North Korea, Eritrea and Syria, which is the only Arab country opposing the resolution. 35 countries abstained from voting, most notably China, India, South Africa, Pakistan, Iran, and Cuba, including the Arab countries Algeria, Iraq, and Sudan.

The vote in the United Nations General Assembly came after a massive diplomatic campaign coupled with explicit and clear pressures on the countries allies of the United States that have worked to develop their relations with Russia during the past few years, including Egypt, Saudi Arabia, the UAE and Arab, and regional countries.

Egypt also called for an emergency meeting of the League of the Arab States, whose final statement urged the need for a diplomatic solution to the “crisis in Ukraine.” The statement acknowledged the “close relations” that Arab countries share with the two sides of the crisis, Russia and Ukraine.

The UAE, a non-permanent member of the UN Security Council, along with India and China, abstained from voting in favor of a Security Council resolution drafted by the United States and Albania condemning Russia’s “aggression” against which Moscow vetoed.

According to statements by Emirati officials, Abu Dhabi’s abstention from the vote derives from its view that taking one side will only lead to more violence and bloodshed.

The United States believes that the countries that stand on the fence between Russia and Ukraine are aligned with the Russian position, and are therefore in the “Russia camp” against the American camp.

Experts believe that Russian President Vladimir Putin has realized the fact that several Arab countries do not trust the United States as a reliable ally, and that he has been working to take advantage of this reality since the end of Obama’s term, whose strategies towards the region are among the foundations of the American strategy for the administration of current President Biden.

From following up on the statements of officials in several Arab countries, the official position, in general, is trying to show its desire to strengthen its relations with Russia, without causing a decline in relations with the United States, which is pressing for Arab countries to adopt a stance against the Russian war in Ukraine.